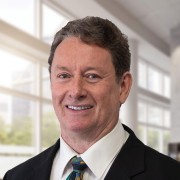 EVERY single time the market goes up we get the “Bubblers” and the “Doom & Gloomers” coming out of the wood-work.

You have to see where they’re coming from to understand why. For example Harry Dent (from the USA) does this, but every time he does, it is to promote his latest book .

The RBA “jawbones” the market because they have only ONE lever labelled “Interest Rates” that they can pull. They need to lower interest rates to stimulate the broader economy, while at the same time not wanting to overheat the Sydney property market. So they release “bubble” sound-bytes into the media in the hope it will convince some investors into sit on their hands.

Starting 15 years ago (and even long before that), the moving average of the median price (blue line on the chart), goes up, goes flat, up, flat, up, flat and so on, in a perfectly orderly fashion. There has been no history of a bubble bursting that I can see. I do see occasions where prices over-shoot and then come off a little, before flattening out and rising again. But I don’t think you could describe this a bubble popping. It is certainly not a graph that you would see of the Share Market over a similar timeframe. Property prices are just not that volatile.

One of the things I see people getting in a flap about is “crazy prices”. Well I suppose if you see a $1M property go up 15% we are talking a $150,000 increase, and that is significant in dollar terms, but not really in in % terms. There has been a number of times in the past where property prices have gone up 25%, 30% and more in just 1 year, so what we are experiencing  now is nothing out of the norm.

So where to from here?

At some stage the growth in the Sydney market will slow down – as it always has done in the past.

Bear in mind we are probably just playing some catch-up from the 5 years of flat growth from 2003-2008 which followed an unprecedented 13 year period of growth from 1990-2003.

The economy in Australia is fairly stable. We have low sovereign risk with a reasonably stable government. The $AU is offering a good exchange rate for investors bringing money into the country. We have very limited supply (in the areas that people want to live) versus demand. This can only mean one thing for prices in the short term – UP!

If you are waiting for prices to fall, you might be in for a long wait. Yes, rental yields have softened, but rents de-coupled from property prices many years ago. Yes, mortgage interest rates will rise at some point in the future, but lenders’ serviceability calculations for approving buyers for loans are done on current rates + 2%. So in theory, 7% interest rates should be able to be tolerated by borrowers, and we are a VERY long way from 7% mortgage rates in my view. This is Sydney’s time to shine in the sun.